How do I interpret the AIC?

My student asked today how to interpret the AIC (Akaike’s Information Criteria) statistic for model selection. We ended up bashing out some R code to demonstrate how to calculate the AIC for a simple GLM (general linear model). I always think if you can understand the derivation of a statistic, it is much easier to remember how to use it.

Now if you google derivation of the AIC, you are likely to run into a lot of math. But the principles are really not that complex. So here we will fit some simple GLMs, then derive a means to choose the ‘best’ one.

Skip to the end if you just want to go over the basic principles.

Say you have some data that are normally distributed with a mean of 5 and an sd of 3:

Now we want to estimate some parameters for the population that y was sampled from, like its mean and standard devaiation (which we know here to be 5 and 3, but in the real world you won’t know that).

We are going to use frequentist statistics to estimate those parameters. Philosophically this means we believe that there is ‘one true value’ for each parameter, and the data we observed are generated by this true value.

The estimate of the mean is stored here coef(m1) =4.38, the estimated variance here sm1$dispersion= 5.91, or the SD sqrt(sm1$dispersion) =2.43. Just to be totally clear, we also specified that we believe the data follow a normal (AKA “Gaussian”) distribution.

We just fit a GLM asking R to estimate an intercept parameter (~1), which is simply the mean of y. We also get out an estimate of the SD (= $\sqrt variance$) You might think its overkill to use a GLM to estimate the mean and SD, when we could just calculate them directly.

Well notice now that R also estimated some other quantities, like the residual deviance and the AIC statistic.

You might also be aware that the deviance is a measure of model fit, much like the sums-of-squares. Note also that the value of the AIC is suspiciously close to the deviance. Despite its odd name, the concepts underlying the deviance are quite simple.

As I said above, we are observing data that are generated from a population with one true mean and one true SD. Given we know have estimates of these quantities that define a probability distribution, we could also estimate the likelihood of measuring a new value of y that say = 7.

To do this, we simply plug the estimated values into the equation for the normal distribution and ask for the relative likelihood of 7. We do this with the R function dnorm

Formally, this is the relative likelihood of the value 7 given the values of the mean and the SD that we estimated (=4.8 and 2.39 respectively if you are using the same random seed as me).

So you might realise that calculating the likelihood of all the data would be a sensible way to measure how well our ‘model’ (just a mean and SD here) fits the data. 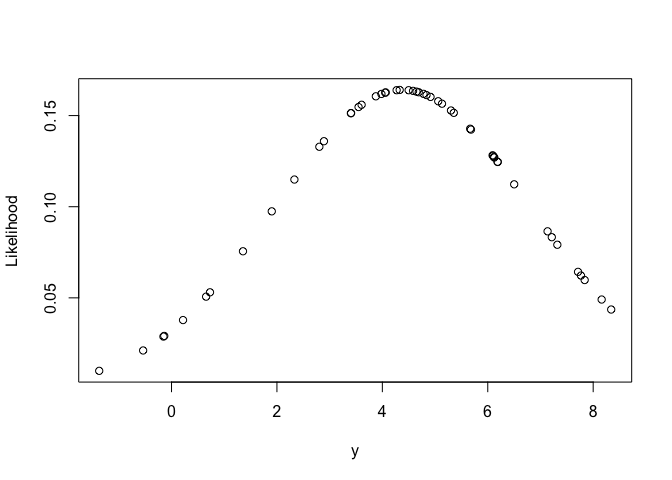 We can do the same for likelihoods, simply multiply the likelihood of each individual y value and we have the total likelihood. This will be a very small number, because we multiply a lot of small numbers by each other. So one trick we use is to sum the log of the likelihoods instead of multiplying them:

The parameter values that give us the smallest value of the -log-likelihood are termed the maximum likelihood estimates.

Now say we have measurements and two covariates, x1 and x2, either of which we think might affect y: 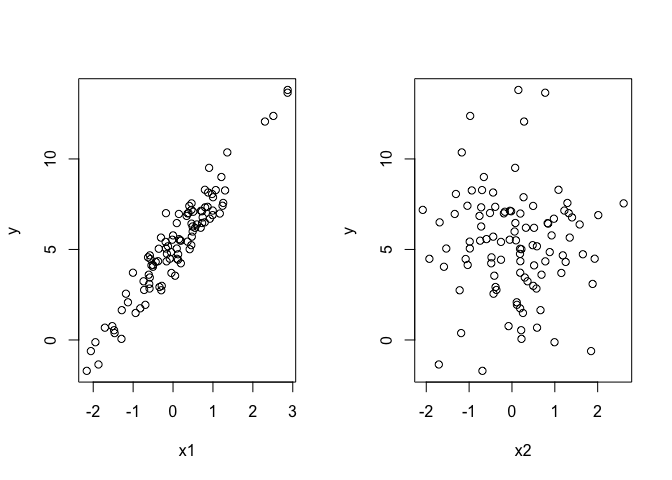 So x1 is a cause of y, but x2 does not affect y. How would we choose which hypothesis is most likely? Well one way would be to compare models with different combinations of covariates:

Now we are fitting a line to y, so our estimate of the mean is now the line of best fit, it varies with the value of x1. To visualise this: 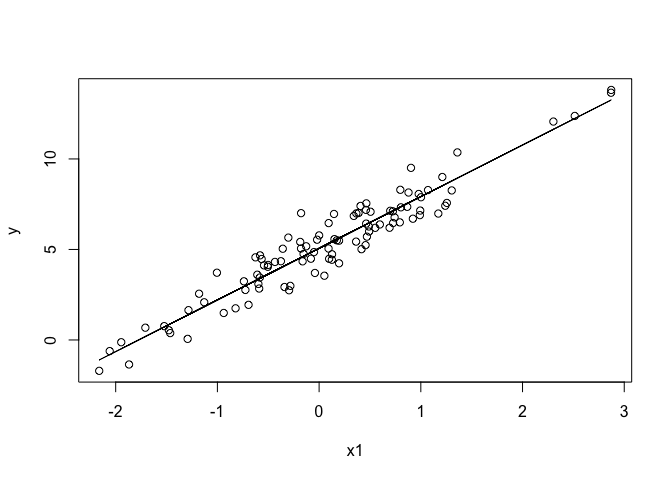 The predict(m1) gives the line of best fit, ie the mean value of y given each x1 value. We then use predict to get the likelihoods for each model:

The likelihood of m1 is larger than m2, which makes sense because m2 has the ‘fake’ covariate in it. The likelihood for m3 (which has both x1 and x2 in it) is fractionally larger than the likelihood m1, so should we judge that model as giving nearly as good a representation of the data?

Because the likelihood is only a tiny bit larger, the addition of x2 has only explained a tiny amount of the variance in the data. But where do you draw the line between including and excluding x2? You run into a similar problem if you use R^2 for model selection.

So what if we penalize the likelihood by the number of paramaters we have to estimate to fit the model? Then if we include more covariates (and we estimate more slope parameters) only those that account for a lot of the variation will overcome the penalty.

What we want a statistic that helps us select the most parsimonious model.

The AIC as a measure of parsimony

Why its -2 not -1, I can’t quite remember, but I think just historical reasons.

Then add 2*k, where k is the number of estimated parameters.

For m1 there are three parameters, one intercept, one slope and one standard deviation. Now, let’s calculate the AIC for all three models:

We see that model 1 has the lowest AIC and therefore has the most parsimonious fit. Model 1 now outperforms model 3 which had a slightly higher likelihood, but because of the extra covariate has a higher penalty too.

You don’t need to do these calculations yourself everytime you want an AIC. The function AIC(m3) will just give it to you.

So to summarize, the basic principles that guide the use of the AIC are:

[1] Assuming it rains all day, which is reasonable for Vancouver.