Species on the Move Conference: A synopsis of day 2

Here’s my day two synopsis, covering a few big themes and some of the talks I saw. If you want to know more, check out the book of abstracts. See also my Day 1 synopsis and Michelle Neil’s - storify of the tweets. Here is a summary of some key things I learnt.

Two big themes emerging today were
Conservation decisions in a changing climate - We want to know when to translocate species, if we even should translocate them, where we should be putting protected areas to capture climate migrants, how to assist climate-driven migrations, and what to do about other human impacts like harvesting; and

Another day of extensive media interest directed at Species on the Move. Commendations are deserved for Gretta Pecl and the team for getting the important messages from this conference out there.

One talk stood out for making use cutting edge techniques to address a really big picture question: Julia Blanchard is charting the future of sustainability of human food using (ecological) community modelling approaches. Blanchard’s work is far ahead of the curve. Miguel Arajuo, leading SDMer, posed a rhetorical question - how would you assess the future of biodiversity? He spent the last 16 years of his career answering this question with species distribution models. He ended his talk by suggesting if he were to do it all again he would start with a community/ecosystem approach. Well, Blanchard is making great strides in achieving global ecosystem models that are relevant to a no smaller problem than the future of sustainability of the human species.

I won’t say more, because the work is unpublished, but check out some of her earlier work on community modelling. This is certainly a space to watch.

Conservation decisions in a changing climate

Hugh Possingham led the keynotes, reminding us to remember the big picture of conservation- it is not just climate change we need to model/predict/adapt to, there is widespread Change in society, economies and the environment.

Tracy Rout’s work was a great introduction to decision science for assisted colonisation of range shifting species. She showed how a transparent decision framework (open access pub) can help us work out what we need to know if we are translocating a species. Her work highlights that decision science can be most useful when we don’t know much about a system, because it helps us identify the uncertainties that matter for conservation.

A decision tree for deciding whether to move species threatened by climate change from Rout's paper in PLoS One (open access).

Joshua Lawler showed how we can include climate change in cost-effective priorities for reserve placement. I won’t say more because I think this work is yet to be published.

On a positive note Timothy Bonebrake predicts that the recovery of an endangered spoonbill will be slowed, but not reversed, by climate change. His talked also weaved in his work on plant conservation under climate change.

Fishing industries will also be affected by range shifts. Eva Plaganyi argued that models can help us ‘re-write history’ so we can learn more from past management mistakes. She showed an application to range in lobster in South Africa, which is impacting on valuable abalone fisheries. Her protege Viv Tulloch, is working on similar models to predict the future recovery (or not) of southern ocean whales.

Understanding and predicting change in whole communities was another major theme

The community thermal index was highlighted in several talks. Rick Stuart-Smith and team have shown that there are thermal biases in fish communities, with most fish species being either associated with temperate or tropical conditions. This has implications for the effects of ocean warming on whole communities, as communities near their thermal limits may suffer large species losses. Mike Burrows is also using the community index to investigate sensitivity of different communities to warming. 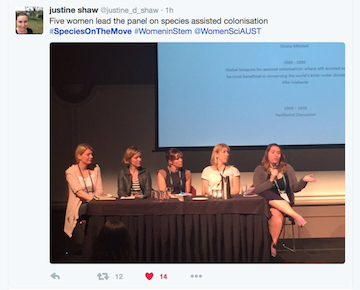 Species on the Move is helping turn the tide on gender inequity in science by promoting #WomeninSTEM on what is the "International Women in STEM day": we saw an all female panel during an organised discussion.

Climate-driven changes in one ecosystem can affect whole other ecosystems. Megan Saunders showed that responses of tropical seagrass ecosystems to sea level rise depend on whether coral reefs grow upwards, coral reefs shelter seagrass from waves so if corals don’t keep up with sea level rise lagoons may loose seagrass too. A key management policy response is helping coastal ecosystems migrate inland through ‘planned retreat’ of coastal infrastructure. See her video for a fun introduction to this topic

Some exciting work on modelling community responses is coming out of CSIRO. Bruce Webber introduced a new tool for distinguishing novel environmental ranges from contemporary, to help avoid extrapolation in models. The tool ExDet is available via his blog. Weber also highlighted that the global datasets for temperature and rainfall we use for model fitting have considerable uncertainties. Be careful!

A keynote from Simon Ferrier, also of CSIRO, highlighted that species composition doesn’t change linearly across environmental gradients, like we often assume it does. Karel Mokany presented meta-community modelling as a solution to this problem, and showed its application to dynamic models of climate-driven shifts in whole plant communities. 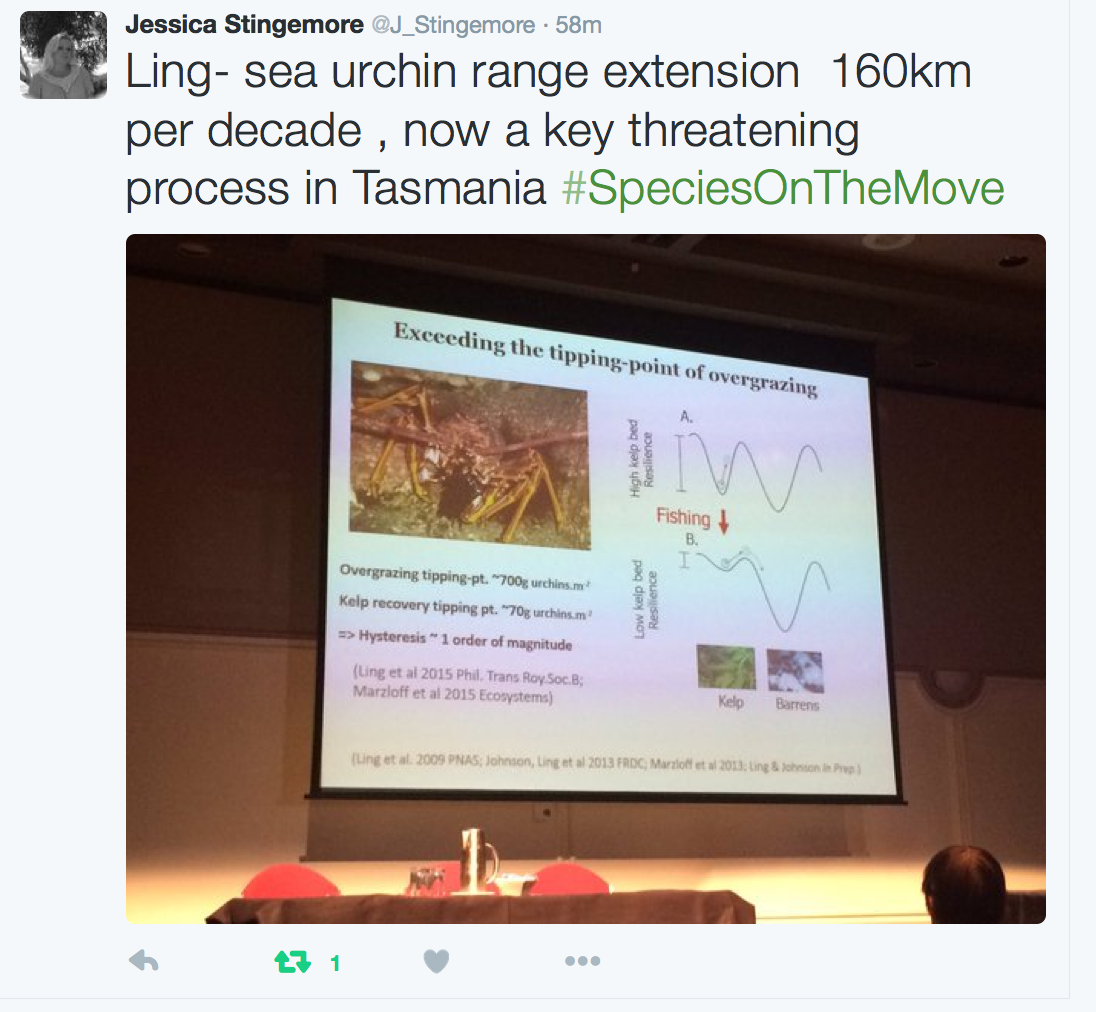 Digging deeper into ecological interactions Miguel Arajuo is finding there are general rules that can explain the assembly of species interactions which can be exploited for distribution modelling of ecological webs.

A regional example of the importance of species interactions comes from Tasmania, where barrens formed by the climate migration of a sea-urchin have driven a phase-shift from productive kelp habitats to rock, changing the entire reef community: check out the video. Martin Marzloff is modelling the dynamics of this system to understand where the tipping point occurs for canopy loss. Scott Ling talked about how evidence for the regime shift and the implications it has for further climate-driven invasions. His latest work is in progress, but check out his latest multi-system study on regime shifts caused by sea-urchins (thanks to Suzanna Mason @SuzannaCMason for being my eyes on the ground for this talk).

Several talks have highlighted the large number of taxonomic and temporal gaps in our sampling of range shifting species. Several talks today worked to fill the gaps. Julian Olden is looking at range shifts in freshwater fish, an under-studied group. I won’t say more because the work is cutting edge and in prep.

Finally, to wrap up on a bit of fun, Robert Colwell presented in prep work on a new model of niche evolution. I won’t give away his exciting results, except to say he made use of exceptional animations. Several commentators on twitter suggested there should be an award for best animations in a talk and that Colwell would win it.