The nascent field of Ridge to Reef management aims to help plan for the impacts of land-use change and pollutant runoff on coastal marine ecosystems. One way this planning can be done is to identify priorities for forest protection on land that help avoid pollutant run-off to ocean ecosystems.

Our Science for Nature and People Partnership working group on Ridge to Reef fisheries sought to progress the scientific field and provide practical guidance for Ridge to Reef planning in Fiji, Papua New Guinea and the Solomon Islands.

The working group was a partnership between academic scientists, The Nature Conservancy and the Wildlife Conservation Society. 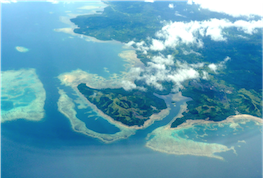 The first challenge was accessing sufficient observations of run-off and coastal ecosystems so that we would be able to understand where the runoff is coming from, where it goes in the ocean and what impacts it has to ecosystems and fisheries. Obtaining suffcient data is challenge in tropical catchments in particular, because they are typically poorly studied.

We had to overcome this challenge in all the areas that we worked in.

For instance, in Fiji we used satellite images of forest cover and water clarity to make predictions about where sediment runoff from deforestation is coming from and where in the ocean it is going.

In Papua New Guinea we used globally available maps of soil cover and maps of elevation to build predictive models of nutrient and sediment run-off.

Lead author Viv Tulloch, could then predict how much nutrients and sediment would may reach coastal ecosystems under different scenarios for the conversion of primary forest to oil palm plantations. We where then able to recommend modified sustainability guidelines for oil palm plantations, which would minimise their impacts on coastal ecosystems.

Importantly, large predators may be some of the most affected by poor water clarity, and these species are also locally important for fisheries.

A major challenge for Ridge to Reef management is that we often to don’t know where the pollutants come from or if there are multiple sources, which ones are the worest offenders. This is a crucial step if we want to then identify where forest protections should be placed.

In Fiji we faced this challenge because there are so many rivers that empty near to coral reefs. So it is not immediately clear which catchments were the cause of poor water clarity.

We developed a new type of modelling technique that enabled us to make educated guesses about which Rivers where likely having the greatest contribution to poor water clarity on coral reefs. This meant we could then trace pollution back to those catchments that were the worst offenders and identify places where protection a forest might be a priority for conserving coral coral reefs and their fisheries.

Importantly this modelling technique worked with freely available satellite data, so it can be straightforward to apply in data poor regions.

For our work in the Kia region of the Solomon Islands with The Nature Conservancy we could not get accurate measurements of water clarity with satellites, because the islands were two topographic complex and the water too shallow.

However, the Nature Conservancy had extensive surveys of lagoonal coral reefs in the region of Kia.

In Kia logging operators create ‘log ponds’. Log ponds are spots on the coast where they bulldoze mangroves so that they can drag logs off the land onto transport ships.

There was concern that the sediment was smothering branching corals that are important habitat for the bumphead parrotfish, itself an important fishery species. Bumphead parrotfish are also listed by the International Union for the Conservation of Nature as a threatened species.

We wanted to estimate the area of the reef habitats that were affected by the log ponds.

To do so we used the reef surveys, which covered many different types of corals and also other types of benthos, that included branching corals, brain corals that are very stressed tolerant, algae, silt and sand.

We analysed how the community changed from high coverage of branching corals in clear waters far from log ponds, to higher coverage of stress tolerant corals, silt and sand in murky waters near to log ponds. We could then use the coral reef benthos types as indicators for how far the impact of sedimentation reached from log ponds.

Using these predictions we can then predict how much of all the coral reefs in the region have been affected by logging.

This was useful because it told us about 60% of the region had already been affected by logging. This includes the loss of branching corals that are important habitat for bumphead parrotfish

Furthermore we could evaluate what area of lagoonal coral reefs had been protected by recent actions to stop further illegal logging in the Kia region.

So so the data on coral reefs helped us to resolve the tracing challenge of where pollutant impacts are sourced from. This work could be used to inform on priorities for where future should not be located.

The final major challenge we identified that ridge to reef managers face is communicating the complex chain of processes that links land-use change to it’s impacts on coastal marine ecosystems.

We worked very closely with our partners in the Wildlife Conservation Society and The Nature Conservancy to develop models and communication products that would be most useful for the stakeholders in the regions where we were working.

This meant that we were well prepared when towards the end of the project when we presented management advice back to local stakeholders.

In fact Amelia Wenger (from UQ) and I attended a local workshop with The Wildlife Conservation Society in Fiji help them design a ridge to reef plan for the region of Bua.

A key aspect of our communication success at the meeting was that were able to translate how models into maps that the local stakeholders could understand and relate to.

We were also careful to present scientific data in terms of what local stakeholders were most interested in.

For instance, when presenting our work on the effects of sedimentation on fish we focused on groups of fish that are important food species like large predators.

So our working group on Ridge to Reef management identified three major challenge and found solutions to those challenges to help advance management of tropical catchments.

There are however some important challenges for the future.

First is that we did not link impacts on reefs to their effects on impacts on the value cultural services or value provided by fisheries.

Doing so we’ll be important because changes in fish abundance do not always translate into impacts on fisheries. The response of fishers themselves to changes in abundance can mitigate or amplify the impacts of pollution on fisheries.

Another important challenge is improving the accessibility of models and the data that are required to build those models. This will mean they can be easily applied data poor tropical catchments by small research teams who are often working under tight stable time and budget constraints.

Another team has been developing global models of sediment runoff, which may help fill this knowledge gap and make reliable models more accessible.

As for our working group it is finished now, but we are still in the process of publishing the last few papers. Look out for our next one in a few months that looks at the range of models available for informing ridge to reef management or get in touch if you would like to read a pre-print.