R can be frustratingly slow if you use its loops. However, you can speed it up significantly (e.g. 20 times!) using the Rcpp package. That could turn a day long simulation into an hour long simulation.

I had heard years ago about the Rcpp package. Rcpp lets you write and use C ++ functions in R. However, I had never bothered to learn how to write C ++. Instead if my simulation model got too slow, I just redefined the problem (e.g. by using smaller spatial domain) so I could continue with R. 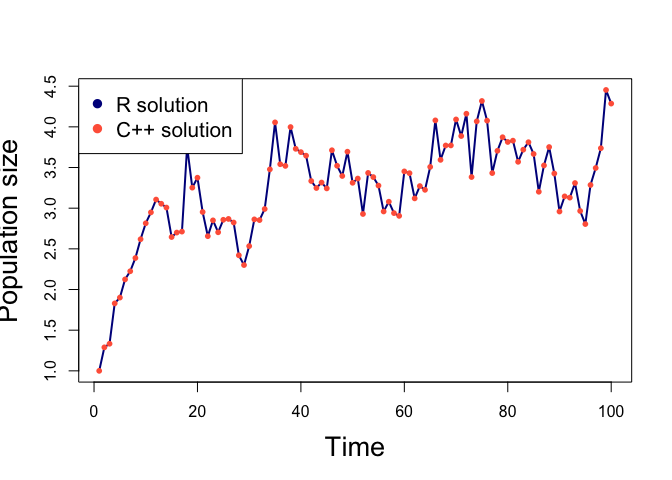 Output of one of the population model runs showing solutions from an R function and an Rcpp function. The C++ version gives an identical results and was up to 20 times faster.

I persisted with R, rather than use another language, because of its powerful graphics and the convenience of using a functional language like R to perform sensitivity analyses. More on this later.

The other day I was browsing Wickhams Advanced R book and realised it is actually pretty easy to write basic C++ loops.

Then I wondered if it would still be faster if you had to make repeated calls to the same C++ function, for instance if you wanted to run a sensitivity analysis, varying some model parameters. I like to use R for this task because the purrr package makes it incredibly easy to run arbitrary combinations of parameters through a function. Then it is straightforward to summarize and plot the results with ggplot2.

Turns out you can get a massive improvement, even for repeated calls to the same function. Here is a test.

A population model in R

First up, let’s write a simple model for simulating population size over time, according to the logistic function. The below function just takes your standard r (intrinsic population growth) and k (carrying capacity) parameters and simulates population size starting at yinit over t years.

Further, to I have included a stochastic process, whose variation is controlled by thetasd, to illustrate Rcpp random number generator.

A population model in C++

Now let’s write the equivalent C++ function. You will need to install the Rcpp package. Note that it has some other software dependencies, so I recommend you read the guide on CRAN.

We write the function definition as a string and pass it to cppFunction from Rcpp:

Hopefully you can understand this, even if you are not familiar with C++. The syntax is reasonably similar to R. If you learned to program in R you may notice a few discrepencies.

First, C++ requires that you specify the type of each variable when its created. You can’t just create new variables without assigning them a type, and you can’t just change the type. This makes C++ more efficient than R, because the computer knows exactly how much memory to allocate a variable and doesn’t have to watch for changes.

Second, notice I start the iterator at time-step 1, whereas in the R code we started at time-step 2. In C++ vectors are indexed starting at 0.

First up, we need to define the model parameters:

Now we can run our model. I am just going to plug the models straight into microbenchmark, so I can compare their times.

We could increase the scope of the C++ code to include a loop over different values of r. However, then we would lose some of the convenience of R, which is good at manipulating data. We also wouldn’t be able to use purrr package to make sensitivity analysis easy.

First, up let’s create a sequence of r values:

Now we can run our two models. I will use purrr::map (the :: just means map is in the package purrr and avoids another call to library()). We will also use set.seed() to make sure both algorithms generate the same series of random numbers, that way we can check whether the results are identical.

map returns a list, where each element is a time-series of population sizes for a given value of r.

Let’s plot the result, for the second value of r:

Now, let’s compare the time. Remember I had wondered whether repeated calls to a C++ function might lose some of the performance gain:

Turns out we still gain a 12 times improvement when using C++.

I don’t believe I have been wasting so many hours waiting for simulations to run all these years. Learning a bit of C++ is well worth the investment.