In this driveability review, I look at some of the dominant packages for mixed effects models The focus of this review is on the practicality of each package, rather than their numerical accuracy. Information on numerical accuracy can be found in the academic literature, see the bibliography below. I will lookat each package’s handling, speed and adaptability for tackling different types of questions.

Summary of the packages strengths and weaknesses. Speeds are relative to lme4 in a test case problem, see below for details.

The first is lme4, meaning linear mixed effects models with S4 classes. lme4 is like an older model sports-car - fast, respectable, well known and able to handle common types of questions. lme4 uses maximum likelihood methods for estimation, so interpret its statistics as a frequentist.

The next three packages are Bayesian techniques.

The second package is rjags, which is an interface to the “Just Another Gibbs Sampler” program. rjags is the Land-Rover of packages for mixed effects models: well tested, able to tackle just about any terrian, but slow and prone to breaking down (usually a user error, rather than the package itself). 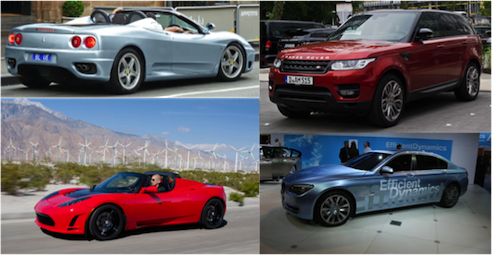 My take on reviewing R packages for Generalised Linear Mixed Effects. Clockwise from top left: The `lme4` package is fast but a bit older, like an early noughties Ferrari; the JAGS program goes anywhere like a Range Rover, but breaks often and is slow; the Stan language is modern and efficient like a hybrid BMW and INLA is fast and modern but requires technical expertise like a Tesla.

The third package is INLA, standing for “Integrated Nested Laplace Approximation”. INLA is like an electric sports car: it is a modern technique that is lightning fast, but there has been limited testing to date and you better understand what is under the hood before you attempt to drive it.

The final package is RStan, which is the R interface to the Stan modelling language. RStan is like like BMW’s hybrid, combining computational speed with flexibility and with exceptional documentation and support.

Skip to the end for a biblography of examples and some cool packages that build on these tools.

A note about philosophy

The frequentist and Bayesian approaches I review here come from fundamentally different statistical philosophies. Here I will tackle the approaches pragmatically, looking at estimation speed and so on, however you might exclude one or the other a-prior based on your bent towards Bayesian or frequentist thinking.

I simulated a simple hierarchical data-set to test each of the models. The script is available here. The data-set has 100 binary measurements. There is one fixed covariate (continuous ) and one random effect with five groups. The linear predictor was transformed to binomial probabilities using the logit function. For the Bayesian approaches, slightly different priors were used for each package, depending on what was available. See the script for more details on priors.

For each package I fit the same linear model with binomial errors and a logit link. To fit the models I used the functions glmer() from lme4, inla() from INLA, custom code for rjags and the stan_glmer() from the package rstanarm to fit the Stan model (you can also write your own custom code for RStan, but for convenience I used the canned version of mixed effects models).

Computational speeds for fitting a binomial Generalised Linear Model to 100 samples with one random and one fixed effect. Relative times are relative to lme4

If you run the code I have provided you will see that all packages come up with similar estimates for the model parameters.

Handling - ease of use

lme4 leads the pack when it comes to ease of use. If you have your data sorted, then you can go from zero to fitted model in one line of code. INLA is similar, however you should generally not rely on default priors but specify your own, which requires additional code and thinking.

Use of RStan and rjags depends on how you use them. You can write your own model code, which can lead to quite lengthy scripts, but also gives you greater number of choices for how you design your model. However, there are also many packages that provide wrapper’s to RStan and rjags that will fit common types of models (like mixed effects models). These tend to be as simple as INLA’s functions, remembering that you should think carefully about prior choice.

If you are going to write your own models, you will need to get good at debugging, so there is an extra overhead there.

Model checking is another important consideration.

For users familiar with GLMs, lme4 probably provides the most familiar support for model checking. INLA can be more difficult to use, because it requires the user to hand-code many model checking routines. INLA, rjags and RStan also require the user to carefully check that the fitting algorithms have performed properly.

Each of these packages use different types of algorithms, so the statistics you will use to check algorithm performance are different. See each package’s documentation for further advice.

lme4 and RStan have the highest quality user-manuals. Both are well written and provide numerous examples that users will find helpful.

The user manual for rjags and JAGS is somewhat brief, but the user can easily find many helpful examples on the web, and these packages are covered by numerous books. So if you are willing to broaden your search you should have no trouble finding help.

RStan and INLA are both relatively new, so fewer examples can be found on the web. While RStan has an excellent manual for both the mathsy and non-mathsy types, documentation of INLA can be difficult to follow for novice users, because much of it is equations.

Web support and chat groups are also an important aspect of model development. Help for all packages can be found on sites like Stackoverflow, or you can post your own new questions there.

Personally, I have found that support for INLA, through their forum, is exceptional. On several occaisons I have posted questions for which I could not find documentation and have generally recieved a response from INLA’s developers before the end of the working day. This is amazing, because it is better than you would expect from many paid services.

I have not participated in forums for the other packages, so I can’t add comments here.

One final note on support is that lme4 and JAGS are both pretty well studied approaches to modelling and there are numerous academic papers dealing with their biases and accuracy. INLA and RStan are relatively new on the scene, so for new and different types of problems you might want to run your own simulation study to check that your model is performing as expected.

Your imagination is the limit with rjags - take it on well driven routes, like a mixed effects model, or off-road on new adventures with Bayesian structural equation modelling - it can do it all.

rjags is followed closely by RStan. RStan has a few limitations, but can basically do anything JAGS can do, and often faster (e.g. this ecological study). RStan will probably eventually replace rjags, but to date rjags persists because of the extensive range of well documented examples users can build on.

INLA comes in fourth with a diverse range of built in likelihoods and model functions (you can even ask the developers to add more and they might do it!). INLA is becoming particularly popular for modelling spatial and temporal auto-correlation, partly due to its speed. You can do these types of models with RStan and rjags but computations might be impossibly slow.

lme4 is the least flexible of packages - though there are some options to customise it’s models. The similar nlme package also provides a range of tools for fitting random effects for spatial and temporal autocorrelation.

There are however, some clever tricks you can do with lme4 to fit a broader range of models. For instance, you can include a random effect where every sample is a separate group in a Poisson GLM to get a Poisson with extra variation.

That’s all. I hope this blog helps you make a good choice before investing in learning a new tool for mixed effects models. Let me know how you go and if you found this useful.

rstanarm for mixed effects models coded like glm() but using Stan for estimation.

glmmBUGS for mixed effects models coded like glm() but using JAGS for estimation.

A new function in the mgcv package (links to pdf) for auto-writing code for Bayesian Generalised Additive Models.

A new study showing how you can fit spatial models with barriers.

The GLMM in R FAQ

Mixed Effects Models and Extensions in Ecology with R my go-to book for theory and code for fitting likelihood based mixed effects models (e.g. with lme4). You will have to buy it.

Example for INLA for spatial models in ecology.

A review of mixed effects models in fisheries science (good for other disciplines too).