Impact of the conservation optimism hashtag

The hashtag #conservationoptimism became popular during the recent International Congress for Conservation Biology symposium. Michael Burgass asked me what its twitter impact was, so here is a quick analysis.

Note that I edited this post (24/08/2017) after Michael Burgass asked me why so few tweets. It turns out (and I hadn’t realised) that the twitter API (Application programming interface) will only return tweets up to 2 weeks old. You have to pay to get older ones. So the data in this post is only relevant to the period over the ICCB conference.

Michael also asked about #iamaconservationist, but that has too few tweets so far to make for a meaningful analysis (about 100).

There were not a huge amount of of tweets over ICCB conference, so it is hard to say too much from a broad brush quantitative analysis like this, but here are a few stats. 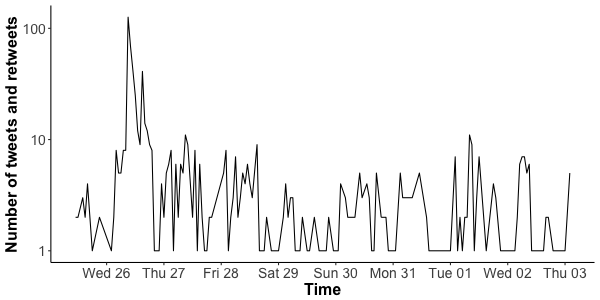 I think that spike on Wednesday corresponds to EJ Milner-Gulland’s plenary at ICCB.

The distribution of tweets per user is not quite as skewed as other hashtags I have analysed. I guess becaues there are fewer users and it is the sort of hashtag that people only post once to (thought they may RT multiple others). 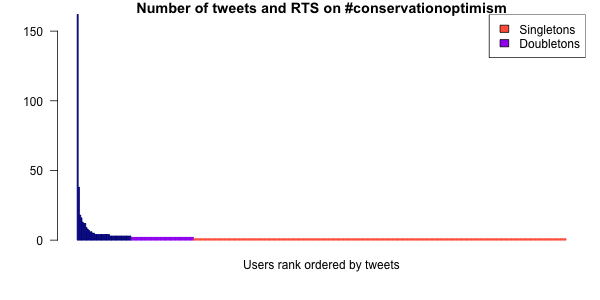 Here is a table of the most popular tweets.

The most popular place is Africa (probably because of that job tweet above), the most popular user EJ Milner-Gulland. Other popular words include inspire, great, share, future.

That’s all. It would be good to do a full historical analysis, but as I note above you probably have to pay for that.